Tory Edwards is originally from Lake Oswego. In addition to being a former D1 collegiate pole vaulter, she has a Bachelors degree in Biology from Oregon State University and plans to enter a Physicians Assistant program in the near future. In the lab, Tory primarily works on DNA extractions, western blot analysis, media prep and cell culture. She has two cats and her hobbies include athletics, outdoor activities and puzzles.

Jason Kent is currently pursuing his PhD in Cell and Developmental Biology at OHSU. He has been a part of the Heinrich Lab since the spring of 2017. He graduated with a B.S in Biochemistry at California Polytechnic State University San Luis Obispo in 2014. Jason is using a functional yeast model to study SDH deficiency in GIST.

Diana Griffith has been a proteomics Senior Research Assistant in Dr. Heinrich's lab since 1999. After mutations in C-KIT, PDGFRa, or K-RAS are found, Diana's responsibility is to express these mutant kinases in eukaryotic systems and use experimental kinase inhibitor drugs to see if kinase activity can be lessened in a dose that is therapeutically achievable. She also performs proliferation assays using the same group of inhibitor compounds on cells in culture that have naturally occurring tyrosine kinase mutations. Furthermore, she lyses and processes human tumor in order to visualize through Immunoprecipitation and Western Blot analysis the presence of constitutively active tyrosine kinases. Diana is from Southern California and has a BS in Cell and Developmental Biology from UC Santa Barbara.

Tracy Walker has been an oncology research nurse for over 10 years, with a focus on GIST and renal cancer clinical trials.   She graduated from Willamette University in Biology and the University of San Francisco in nursing.  In her free time, she likes to run, bike and swim and spend time with her twins. 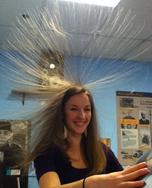 Ashley Young is Dr. Heinrich's Admin Assistant and also gives general support to the Heinrich Lab.  She received a BS in Human Development and Family Science with an option in Human Service from Oregon State University in 2005.  When Ashley is not at work, she enjoys spending time with her family.

Homma Khosroyani graduated from the University of Washington in 2016 with a B.S. in Molecular, Cellular and Developmental biology and a minor in microbiology.  She is currently pursuing a PhD in the OHSU Cancer Biology graduate program.  Homma's project in the lab will focus on using CRISPR/Cas9 screens to characterize cancer cell quiescence in GIST.

Ajia Town is a Senior Research Assistant in Dr. Heinrich's laboratory and has been with the lab since August 2001. She received a BS in Biology/Genetic Engineering and a minor in Chemistry from Southern Illinois University at Edwardsville in 1999.  Ajia is responsible for sequencing, tissue culture, site-directed mutagenesis, DNA cloning, protein expression studies testing drug sensitivity, and maintaining

the lab's website. She enjoys spending time in the outdoors with her family.

Lilli Klug is our Research Project Manager and earned her PhD in Cancer Biology from OHSU in 2017. She has been a part if the

Heinrich lab since spring of 2012. She graduated with a B.S in Biology at Colorado State University in 2008. Lilli is investigating novel KIT regulatory proteins in GIST using human cell lines that model KIT-mutant tumors seen in patients.